Cécile Girard is a French artist, born in Paris.

In 2009, she decided to go and live in China and get back to the sources of her inspiration, traditional Chinese calligraphy and painting. She deepened her knowledge and technique with ink, learning from contemporary and traditional Chinese painters and this helped to develop her painting. She has been a resident in Shanghai since July, 2009. She set up a Fine Arts course workshop there, intended for Chinese and foreign students of all ages.

Cécile has developed her unique teaching style following her experience in international schools in France, Italy and China (Beijing and Shanghai).

Since 2012, she has collaborated together with the Pavillon de L’Exposition Universelle organized in Shanghai (experimental “open class”, exhibitions) and also with the University of Shanghai (Shanghai Normal University, conferences, publications).

Cécile Girard started her painting and history of art studies in Paris at the Martenot School of Art, the Ecole du Louvre and the Sorbonne.

In the mid-90’s, Cécile went to China where she studied calligraphy at the Central Academy of Fine Arts in Beijing. She subscribed at the same time to the artistic movement of the Naxi painters from Yunnan in Beijing and collaborated together with the Naxi painter Zhang Chun He.

After Beijing, Cécile went to live in Italy and chose to immerse herself in Italian art and light, studying the making of stained glass in Venice.

Back to France and careful to maintain a link with China, she perfected her mastery of traditional Chinese painting and calligraphy with master Deanna Gao.

Cécile regularly exhibits her art in galleries in both France and China. In 2005, she was selected for the 2003-2005 France-China Exchange Years. In 2014, she took part in a group exhibition in China and in France as part of the celebrations to mark fifty years of Sino-French relations. 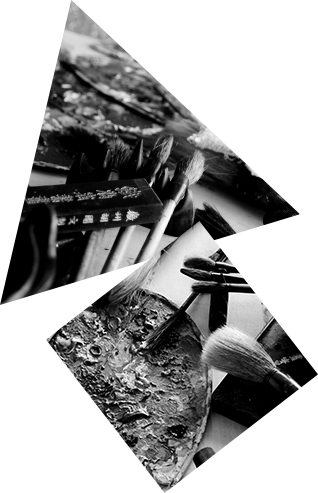